Two years after hitting a career high with a placing in the Gr.1 Cantala Stakes (1600m) at Flemington, Wyndspelle has returned across the Tasman for another shot at Melbourne’s spring riches.

The six-year-old Iffraaj entire will line up in Saturday's Gr.1 Toorak Handicap (1600m) at Caulfield, with expat Kiwi jockey Michael Dee booked for the ride.

Otaki trainers Johno Benner and Hollie Wynyard set their sights on Melbourne after Wyndspelle resumed with two strong performances at Hastings this spring, chasing home Melody Belle in the Tarzino Trophy and overcoming a slow start for a strong-finishing fourth in the Windsor Park Plate.

"He's proven that he can measure up to a good level on both sides of the Tasman," Benner said. "You've got to go in with the right attitude and have a crack at it.

"I thought he probably should have finished second to Melody Belle again the other day, when he overcame that slow start and ran home with some very good sectionals.

"If we'd gone for the Livamol Classic (2000m), we would have been up against Melody Belle again at weight-for-age, and over a distance that's a bit beyond his best.

"So we decided to take him over to Melbourne, where we could have a crack at some handicaps with great prize-money, and do it from a good position in the weights."

Benner was delighted to see Wyndspelle come out of Wednesday's barrier draw with gate eight.

"I was rapt with that," he said. "He's in the inside half of the field, with plenty of speed inside him and a lot of the favoured runners drawn wider out. He should be able to find a good position in midfield, which is where he races best.

"Everything's going well heading into Saturday. He's travelled over nicely and done everything right. He's a pretty seasoned horse and has done all of this before.

"We'll see how Saturday goes before making any other plans, but we might look at the Crystal Mile (Gr.2, 1600m) at Moonee Valley or the Cantala at Flemington, which he's run so well in before."

Benner and Wynyard are also on the Gr.1 Victoria Derby (2500m) trail with the talented three-year-old Shakespeare.

A winner and twice placed from six starts in New Zealand, the Poet's Voice gelding finished ninth in the Victoria Derby Trial (1800m) at Flemington on September 25 and was a close fourth over 2000m at Ballarat last week.

"He was okay last week and probably should have been even closer," Benner said. "He just needs to come up another step.

"He'll go to the Geelong Classic (2200m) on October 23, and he'll need to run in the first three or four if we're going to carry on towards the Derby."

Piaggo, a son of the former Benner-trained star Vespa, finished third on debut at Wanganui before bucking and dropping his rider at Otaki on September 26. He has subsequently won an 800m trial at Otaki.

The Munnings filly Kentucky May, who carries the same pink-and-silver Jen Campin colours as Wyndspelle, finished second at Otaki in her only start to date.

"They both go pretty well," Benner said. "They've got a bit of ring-craft on their side now and should be good chances this week." 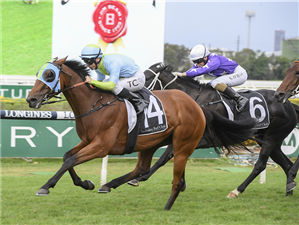